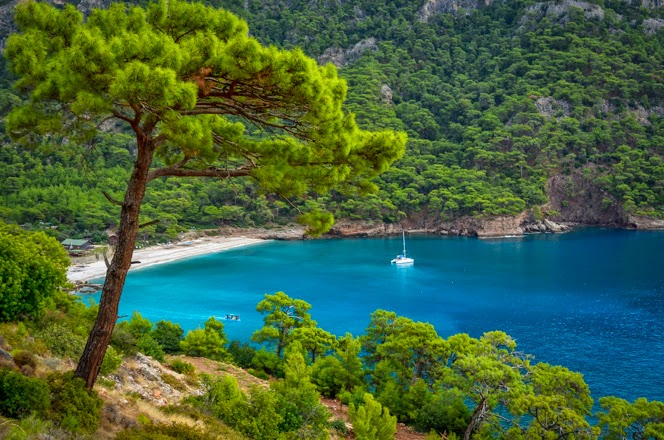 It was still early in the afternoon when I reached the campsite of Helin Kamp in Kabak Valley, so I decided to take a hike. I walked down the valley in search of the secluded beach I was told by the owner.  It was a long walk alongside the hill, a bit dodgy on some spots with rough steps made of collected rocks or earth and wood planks securing it from crumbling.  The path is through the forest and from time to time I take a break to scrutinize some interesting flowers, mushrooms, shrubs, butterflies or rock cave along the way. 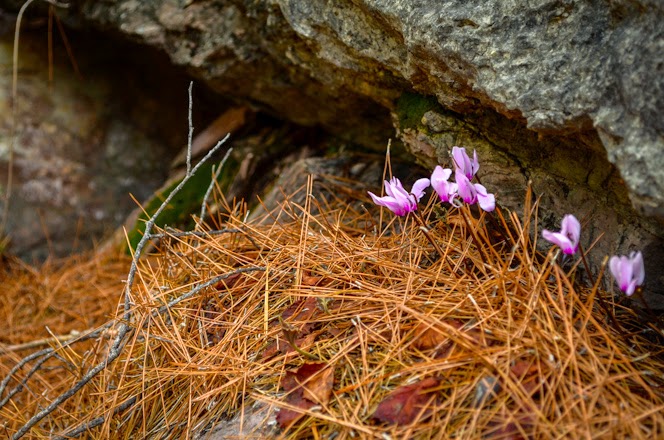 Finally, I treaded the last footsteps on to the ground or sea level but the beach is on the right side and I still have to cross cautiously, stepping and hopping off between and on top of big boulders.  And as the owner of the place told me, it’s their private beach, yes it is.  Nobody there except (again) me! 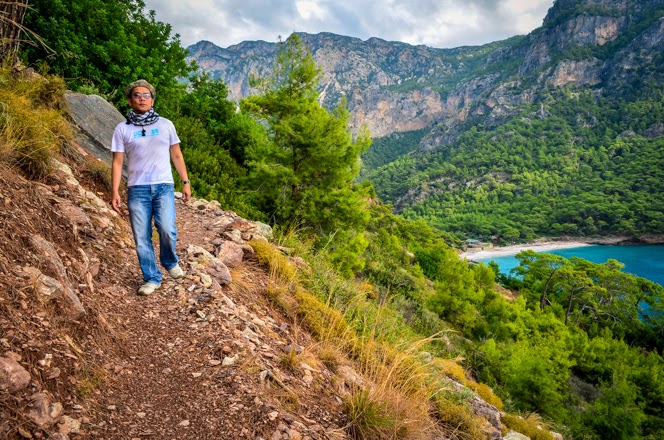 It was a small piece of pebbled beach.  The beach cove is a far sight on my left, no boats on the sea, it’s winter, the water is cold, but the sun is shining.  I was a bit sweaty from the hike, so I stripped off my clothing and frolic on the waters naked.

I stayed there for an hour or so until I realized it’s almost 5 in the afternoon.  I must have been enjoying the calmness and I forgot that it’s going to take me some time to hike back up to the campground. 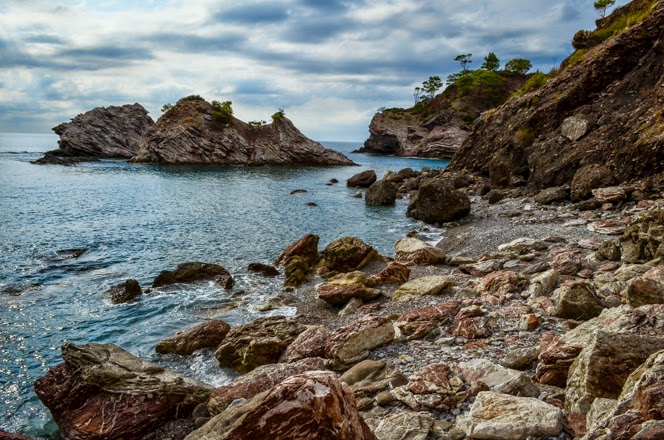 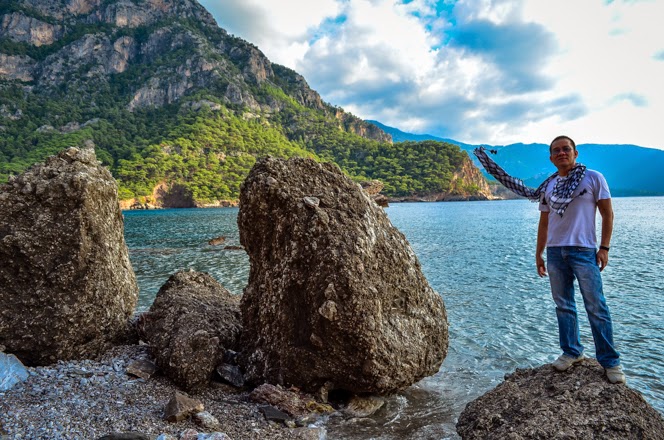 Was I enchanted?  Was I getting tricked by spirits of the forest?

I put on my clothes and began to hop on and off the big boulders once again.  Only this time, I can’t seem to find the steps leading up to the forest!

I kept on leaping and jumping on the boulders that got bigger and bigger but still I can’t find the steps that led me to the beach few hours back.  Where were they?  I went further through the huge rocks, I could see the sandy beach cove but it’s a long tough way to there and the thought of the high tide - that the water level may rise up and swallow me - even before I could reach the sandy beach. 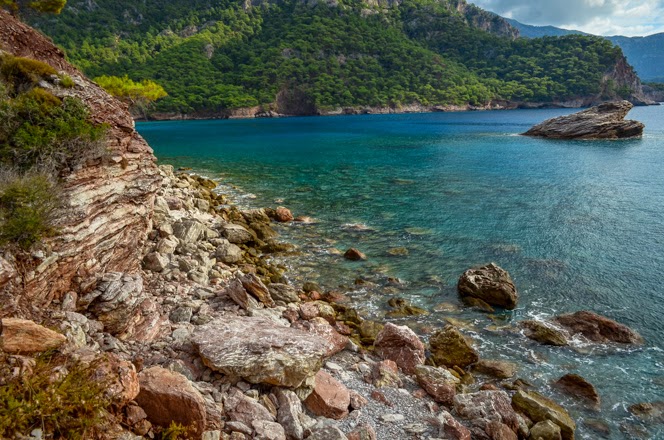 My nerves started to kick in, my legs were tired, started to wobble and it’s going to be dark soon.  I abandoned the thought of getting to the beach, it’s just not possible.  I turned around and walked back through the same rocks I treaded to where I started – the secluded beach where I was having a great time a while ago.  I was confused but trying to control my panic.  I could hear some hissing and the sounds of some crickets which signify the onset of darkness.

I stopped and sat at one of the big rocks for a while, I kept telling myself to “get a grip you fool!” and suddenly I remembered the article I’ve read, I think it was NY Times about having a “ticket”.

I think a local resident once said that people who come to Kabak Valley must have a ticket, whatever that meant.  Then it occurred to me that I might have been issued a “one-way ticket” and that I could never come out of this valley --- alive!  Chilling thoughts (and the chilly winds) started to surge.  If darkness come, I’m pretty sure the owners of the campsite will come looking for me, but what if not?  What if the tide goes high?

Will this be my "final destination"? 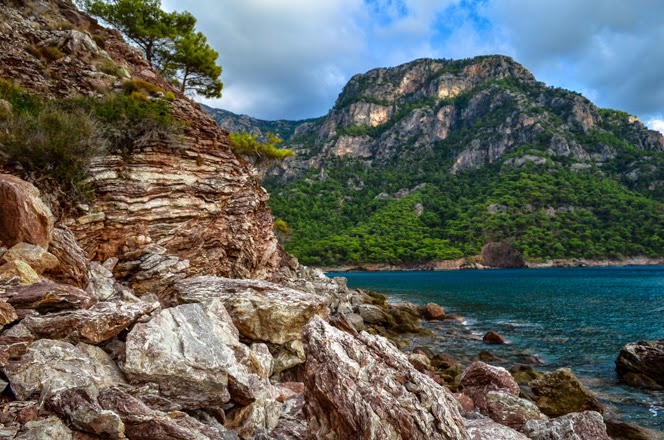 I stood up and continue onto where I started, then I stopped on my track, I heard the winds and the leaves of the trees fluttering above, I gazed up and there it was - The steps! 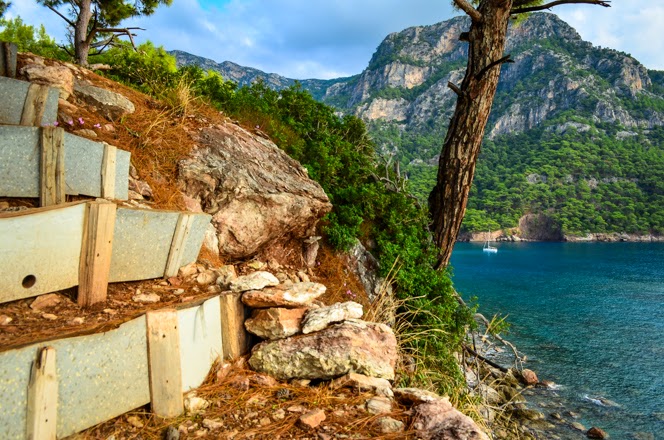 I went up and walked my way through the forest as fast as I could without looking back.  I reached the campground just as the sun is setting down the horizon.

I’m alive!  So after all, I have an invisible “two-way ticket”!

I left the camp ground in the afternoon the following day only to find out that the minibus had just left.  I wandered around the main road and sat at a restaurant where the owner speaks good English.  She told me that the last bus of the day will arrive in a couple of hours.  I took my lunch there while I waited for the bus, constantly looking out the road, thinking that I might miss the bus.  I passed the time picking some grapes hanging above the open dining area. 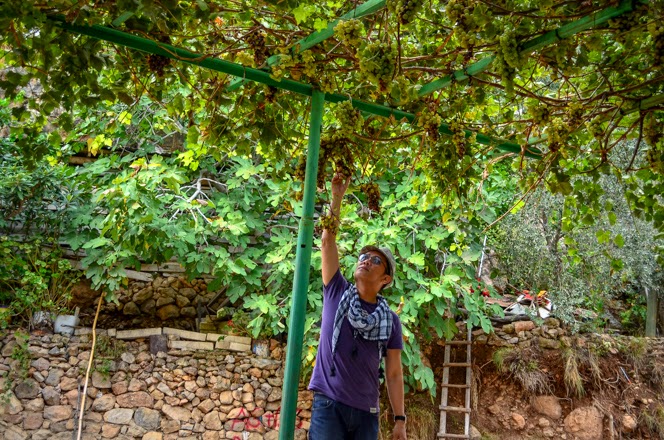 What a sigh of relief when the minibus finally arrived.

I sat at the bus lost on my thoughts, pondering at all the mishaps I had and was truly thankful that -


I went all the way to Fethiye main bus terminal and bought an overnight bus ticket to Istanbul.
Posted by Unknown at Saturday, November 29, 2014