The Baguio Cathedral that survived the carpet-bombing of 1945 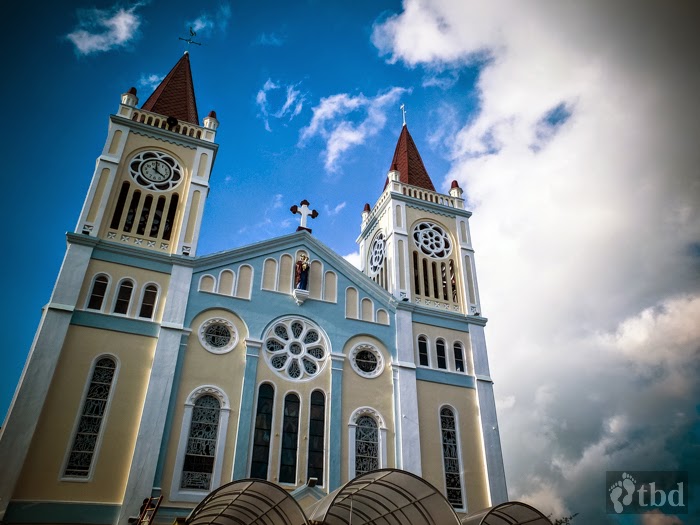 One of the overlooked sights in the city of pines, except of course if one is a (devout) Christian, is the Our Lady of Atonement Church or popularly known as Baguio Cathedral.
The church is located right at the center above the famous Session Road through a 100-step stairs with a metal hand railings.  But if you’re one of those who have a 60-year old lungs like me, I was was always panting, stopping midway, climbing that long stairs from Session Road.  The easier way would be to walk to the end of the Session road way past the Porta Vaga Mall and turn left at the Jollibee on the corner and you’ll find the entrance with just few steps ascending up to the façade of the church.

Apparently, the façade is painted in pink and light blue.  The cathedral (similar to Puerto Princesa’s Cathedral) is a reminiscent of medieval European architecture.  Probably owing to the fact that the architect and engineer who conceived the design is European (Belgian), Rev. Fr. Leo Vendelmans with Fr. Adolph Cansse and two more brothers – Roman Catholic missionaries of the Congregatio Immaculati Cordis Mariae from Scheut, Belgium.
With the help of twenty five Igorot carpenters, the first phase of the church started construction in 1920 and was finished in 1924.  The two stunning square spires were added later on.

The cathedral is located on top of Mount Mary which was previously called “Kampo” by the Ibalois (indigenous people of the Cordillera or more popularly known as Igorots).
During the Japanese occupation, it served as an evacuation center and one of the structures that survived during the 1945 Battle of Baguio (World War II) when the Allied forces executed the large-scale aerial bombing of the city.
In history, isn’t it a common practice that churches are customarily constructed on a hill or the highest point of a city or town?  I can’t help but wonder - perhaps the Cathedral used to be the highest point overlooking the whole city.


Now, I am able to gaze slightly down to the Cathedral in the distance from the upper panorama view deck of SM Baguio.
Location of Baguio Cathedral in Google map:  https://goo.gl/maps/Vbnim