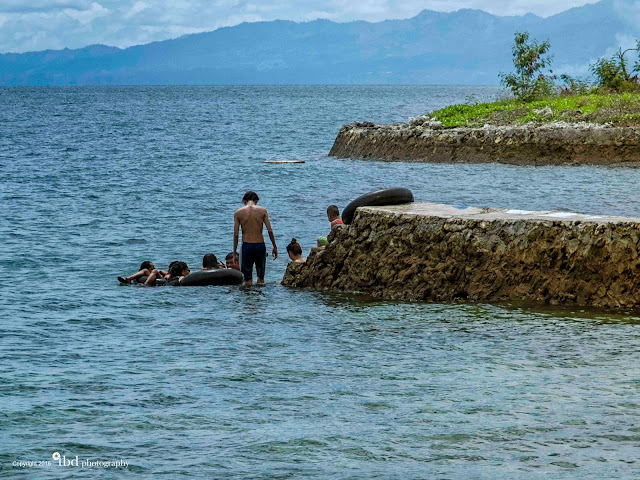 I flew in to Davao City from Manila via the always delayed or eve-changing flight time of AirAsia, from the original 8:10pm, it was moved to 9:10 to finally 10:30pm.  The problem with flying late and a delayed flight of AirAsia is there is nowhere to buy food inside the small Terminal 4 of NAIA, everything closes at 8:00pm, so better bring your own food when you’re taking AirAsia at night. Expect a delay as always.  They did give away free snacks to all their passengers though – a box containing a small bottle of water and two small pastries.
It’s my nephew’s birthday on June 25 and they want to spend a night at a beach in Samal Island.  I haven’t been to Samal so it was a good weekend getaway.  We drove to Sasa Wharf and along with our car, we boarded the barge for the 15-minute ride on to Samal Island.
Vehicle transport via the barge is P200 for light vehicles and P250 for bigger vehicles.  Passengers pay P10 each, they never charged us though for the passengers fares.  Upon reaching the island, we drove about 15 minutes on to our resort.


The Island Garden City of Samal, IGaCos for short, is debatably the country’s largest resort city as it’s host to nearly 70 beach resorts dotting the shorelines of the island.  We settled in one of them, a new resort owned by my cousin’s friend’s friend called “Heavenly Beach Resort” at Barangay Camudmud.   Small beachfront resort, very intimate, aside from our group, there was only another group during that weekend.  There were only few rooms at the yellow–painted concrete houses, two houses beside a giant boulder of rock decorated with a grotto, behind it is a cave inhabited by bats.  The other bigger accommodation right beside the sloping driveway, and another nipa hut that could accommodate bigger groups exactly beside the beach, this one is fan-cooled but the other concrete accommodations are airconditioned.
The beach resort is just beside the Holiday Oceanview Marina where 3 foreigners (2 Canadians, a Norwegian and a Filipina) were abducted as told by my cousin’s friend.
Heavenly Beach Resort is a good beachfront property with basic amenities, we had a BBQ party, charcoals provided by the resort.  We bought some fresh fish from a fisherman vendor who docked his small boat there and brought our own marinated chicken and pork.  The only problem with the resort, although the sea water is clean, it’s white sandy beach, but there are a lot of fragmented corals that you’ll be stepping into while swimming and it really hurts my feet, so better bring some footwear. And during rainy season, and it was raining the day we arrived, some pieces of banana trees, twigs and tree branches gets washed up onto the shoreline.
They have their own boats for guests to paddle around and some rubber tire interiors too for the kids to float around.  Three open huts for dining and the resort itself is surrounded by trees and well-manicured lawns.
The airconditioned rooms cost P2,500 each unit and can accommodate 8 to 10 persons. Individually, they charge P250 per person for overnight stay.
For budget beach fun, this place is really good but if you need to splurge, drive half an hour from the wharf to the 5-star SECDEA Beach Resort.  This resort is truly fabulous and worth a night or two stay, I'll be writing about it on my next article.
Posted by June Agsaoay at Saturday, June 25, 2016