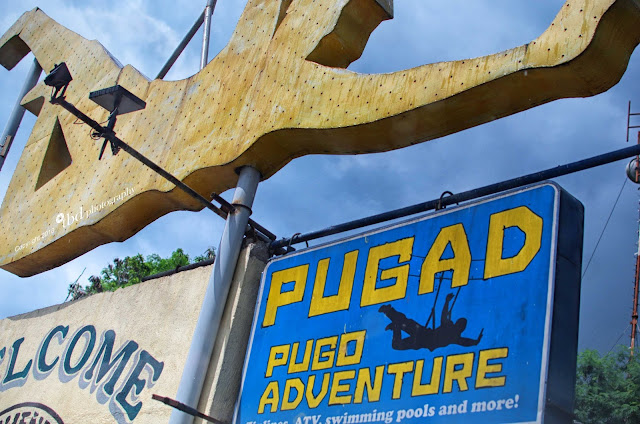 I thought we’re just having a day of sightseeing around Baguio City just as I was discussing the previous night with my friend but when our vehicle started traversing Marcos Highway, I somehow got this feeling we’re heading out of Baguio.  My friend told me we’re going to Pugad but I didn’t know that the place is not in Baguio until we’ve reached it and stepping out of the vehicle I instantly felt the heat which is a huge downgrade from the cold climate of Baguio and saw the sign of the resort which says La Union.   We are out of Baguio!
Again, I was deceived as always the case when dealing with this friend of mine. I really despise her every time she does that and she does that all the time!  I can no longer do stuff that I usually could and enjoy some years back and this is an adventure park!  For heaven sake, I’m starting to become an old fart!

If you’re coming from Baguio, this place is merely an hour drive away, but from Manila, takes about 5 hours.
PUGAD – acronym for PUGo ADventure – is a lovely resort nestled in between mountain ranges and long running clean rivers.  Located in Sitio Kagaling, Barangay Palina, Municipality of Pugo, La Union, PUGAD is becoming a favorite among adventure seekers from citizens of metropolitan Manila and Baguio City as well as nearby provinces.
The facilities itself are quite excellent, pretty huts, manicured lawns, but just upon parking our vehicle, we asked the green-shirted staff where we could park and was told to “just look around and find somewhere to park”.  What a nice introduction of a beautiful resort!
I was still hopeful though as the lady right after the main entrance where one should pay the fees is nice, that made up for the service impotence upon our arrival.  Maybe the parking lot is the most dreaded spot that an employee of the resort could get, after all there is nothing to see there except for vehicles.
As the name implies, visitors should expect a lot of adventure activities like ziplines, wall climbing, rappelling, Australian run down (not sure what’s so Australian about it?), giant swing, paint ball, ATV course, a mini zoo and the several swimming pools both for kids and adults.  I can no longer do those adventure stuff, maybe I can but I don’t want to.  The last time I attempted a zipline in Puerto Princesa Palawan, I gagged just as the staff started putting on the harness.  I forgot that I’ve developed this vertigo which started from way back when, I don’t remember.

We were first given a hut just around the first pool near the entrance, I thought that was it, but my friend returned to the entrance and requested for a hut on the other side of the river and the way to get there is through two hanging bridges that kept on rocking, that in itself for me is already an adventure!  Crossing the bridge onto another bridge, so that was passing by two running rivers, onto our small two-story hut, that’s when I’ve comprehended how big the place is yet it’s full of visitors, mostly families after all it was a Saturday.  But as the afternoon progresses the swarm of noisy holidaymakers and screaming children started to thin.
I’ve noticed the presence of a lot of Koreans who may have come from Baguio too and have discovered the place.  The pools smell too much of chlorine but for people who cannot tolerate that, the beautiful river is a good alternative, it’s clean and running, and accessible going down the stairs from the swimming pool and hut areas.  There are pigeons or doves hovering around and nestling through crevices on the rock walls on the side of the river.  The only thing that's really bothersome at the resort are the presence of so many flies, the nets on every hut did nothing to prevent them from getting in!
For overnight stayers, they offer in-house family airconditioned rooms with TV and showers, and complimentary breakfasts for 6 person costs P6,000.  The main swimming pool is open until 9:00pm for overnighters. 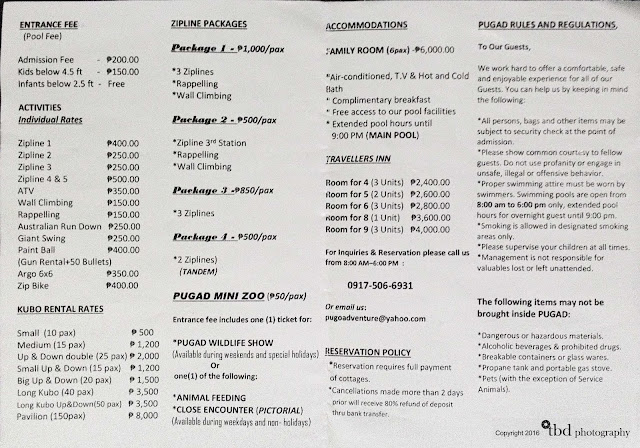 You can either bring your own food, do some barbecue, they have facilities for such, or order food at their restaurant.  Since the place lies in between mountains, it can get really hot so be prepared especially if you’ve got accustomed with the climate in Baguio City.  If you’re coming from Manila, you’re used to it.
We left the place as the staff started to clean up before 5:00pm.  Great place for all ages especially for people seeking adventures and swimming at the same time – all in one place.  A nice stopover for vacationers before heading to Baguio City or before going back to Manila.
The place is open from 8:00am til 6:00pm only.