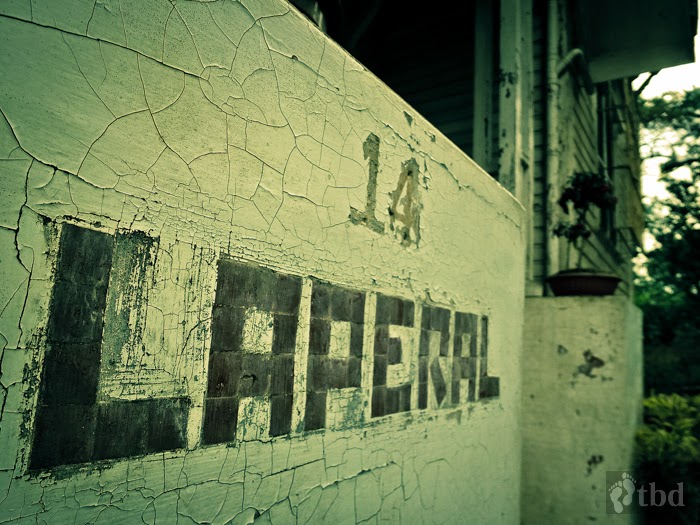 Few months back I have seen this Tagalog flick, well, not really the whole movie, just some quick peeks as I was reading a book.  Nah! – not really few glimpses, perhaps the mid until the end of this quite horrible horror film entitled White House.  It was my sister who was watching it and – (please allow me to introduce to you my sister now as I might be mentioning her in some later posts) – she is one of those persons who keeps on talking while watching, couple that with the incessant simulated laughs if it’s comedy.  She does that to attract my attention, so I’ll be forced beyond my will to watch too.  She is my sister and I love her to bits, so as annoyed as I was - I did !
At the end of the movie – like I usually say on all rubbish films – I wasted another one hour or so of whatever precious time I am left with in this beautiful world of ours.
Anyways, the house in the movie looks genuinely creepy, I am not sure if the production effects has made it but it sure was an internet topic as I found out later.
The White House in Baguio is reputed to be haunted.  I don’t subscribe much to ghost stories but believe me I get scared sometimes.
I went to Baguio (and I’m still in Baguio by the way) and made it a point to see the place.  From Mines View Park, we stopped by Wright Park, The Mansion, Botanical Garden and finally – 14 Laperal – The White Haunted House of Baguio City.
When we approached the main gate, I was truly horrified – with the Entry Fee – at P50!
The bigger and somewhat spookier Diplomat Hotel building and compound at the Dominican Hill is entry free whereas this small house charges 50 pesos?  It doesn’t make any sense to me considering that the place is owned by the well-renowned business mogul – Lucio Tan.  I didn’t quite get it.  So we took some photos of the exterior - and guess what? We immediately left.
That was more than two weeks ago, my sister left but I stayed.  I realized the other day that I came all the way from a place far far away, what’s P50?  I have got to strip off some of my stinginess, so I went today.
There was a local tourist couple there who I even volunteered taking their pics as they don’t have one of those narcissistic gadget called selfie stick and they are using a heavy DSLR.  They went in and after I did a couple of shots around the perimeter of the house, I followed them.  I paid the entry fee and had a very brief conversation with the lady at the entrance.  Bluntly, I asked - Is this place not owned by Lucio Tan, he’s a billionaire, right? What does he need the P50 entry fee for?
Apparently, the place was entrusted by the owner (one of his charitable deeds I suppose) to this bamboo foundation who manages the place and where artistic bamboo carvings were being exhibited.  So clearly, you not only pay for the spine-chilling experience inside a haunted house, but also to view the lovely bamboo arts on display. 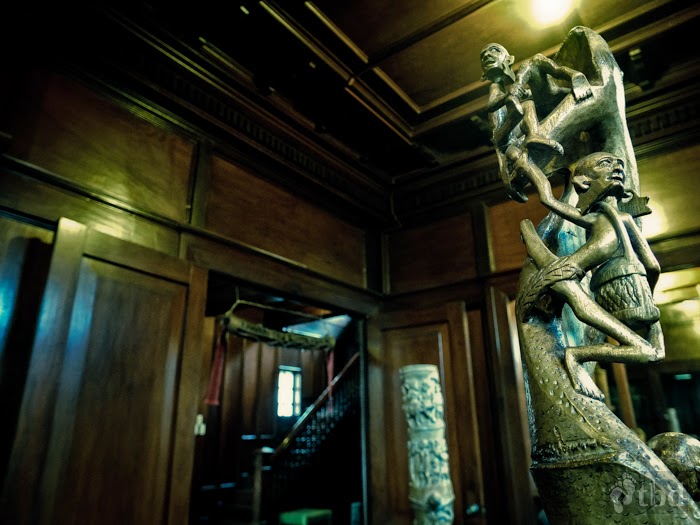 14 Laperal House is almost a century old two-storey white wooden mansion plus a terrace room with a balcony overlooking the main road that holds a deep macabre history.  The house located beside the Teacher's Camp along Leonard Wood Road was built during the 1930s and home of one of the city’s oldest clan – the Laperals - Don Roberto and Dona Victorina Laperal and family.
Stories told, the house became a Japanese garrison during World War II, and like any other such places – tales of gruesome deaths occurred. Filipino men suspected of allying with the American forces were brutally tortured and women raped by the occupiers in the bedrooms of the house.
Thereafter several stories emerged.  Don Roberto Laperal himself fell to his death on the front concrete stairs of the house, a vehicular accident killed a little girl while crossing the road in front of the house, a house help committed suicide in one of the rooms, and so on. 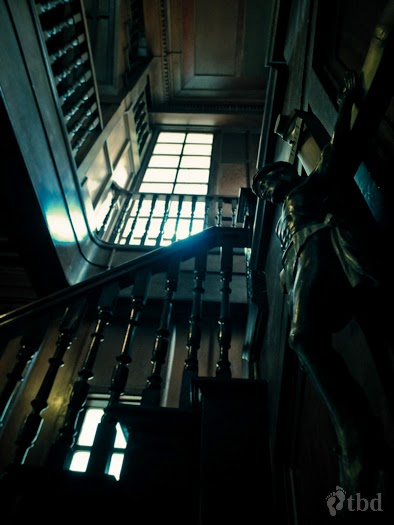 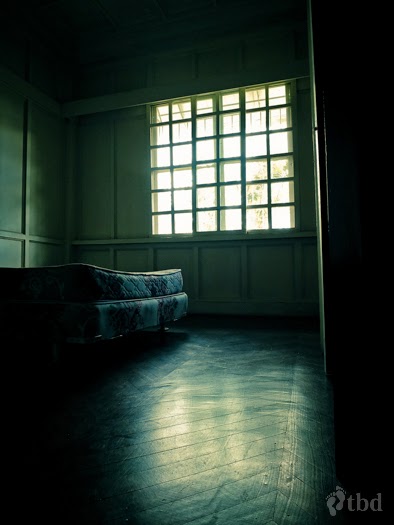 With so much tales of untimely deaths, to this day, restless spirits reside according to mediums and and people with third eye who have visited the place.
There were reports of ghost sightings from several witnesses that include the caretakers, security personnel, neighbors and passersby.
A woman in white dress, a completely-still child standing on the porch and images staring from the window panes, unexplained sounds of doors and windows opening and closing, lights switching off,  and strange footsteps, among others.

Getting back to my visit - guess what?  The couple who went up stayed just a couple of minutes, they panicked perhaps and left? So I roamed around the place alone.
For devout Christians, image of Christ on crucifix is on the wall right before ascending the second floor, utter some prayers.  Three sets of shiny varnished old wooden staircase lead to the second level where the family bedrooms are located.  There were some locked doors on the left side along a narrow corridor leading to a window overlooking the back garden.  There is a creaking screen door that separates the staircase landing and the hallway to the rooms.  I went inside the rooms, all wooden parquet flooring, it is almost bare, not much to scrutinize except for some naked old beds on the smaller rooms, and a 70s or 80s model antique Sony television beside the fireplace at the master’s bedroom and a closed veranda with a chair in one of the rooms.  A narrower staircase leads up to the upper mezzanine floor where for some reason the door to the attic is opened and you could vividly see the electrical wirings and wooden frames above the ceilings of the rooms of the second floor.  Now, that is a bit creepy, reminded me of the movie The Grudge.  There is a balcony where one can watch the traffic down the main road below.
The first floor where I have spent a lot of time is the exhibit area for bamboo objet d’art, some of them are equally creepy but mostly striking pieces of native art.
The wooden Victorian-style Laperal mansion is quite a nice vintage house.  It was around 4:00pm when I was at the house and it closes at 5:00pm.
I was the only one there, I did not hear any door or windows shutting, no footsteps, the lights were on the whole time, the only thing watching over me were the old wooden walls of the rooms, except for the occasional gust of the cold February winds coming from the open windows no strange occurrence or feeling.

For me - minus the eeriness brought about by the spooky tales and ghastly history - it is simply a white wooden mansion converted into a museum.  Perhaps because it was day time? Perhaps because I don’t have a third eye? Or probably it's somewhere along that famous line from the movie Jeepers Creepers 2 - "They can smell your fear."


Is it worth visiting?  It depends on your interest and perspective on things.  If only for its antique characteristics and for the beautiful bamboo carvings on exhibit, it would just be another okay tourist sight.  It's like the historical city of Troy in Turkey, minus the guide narrating all the interesting history, it's just a piece of land and few structures.

A tiny disappointing for me because after all the entry free highlights of Baguio like Mines View Park, Wright Park, the lovely Botanical Garden which are all along the same jeepney route, all of a sudden, one has to pay 50 pesos entry fee for this museum?
I have seen several tourists stop by outside the gate, took some pictures and eventually left. I guess they find the P50 entry fee offensive.
P30 would have been reasonable, only then would I expect an increase in the number of visitors coming to the place.  Maybe I’m wrong - just my opinion.

How to get to Laperal White House:
Take any jeepney that goes to Wright Park, Botanical Garden, The Mansion and Mines View Park.  Tell the driver to drop you off at Laperal House.  Fare is P8 per way.
Take the Mines View Park Jeepney if you want to start your tour from there (click for Google map location or copy and paste https://goo.gl/maps/1GxZJ), the terminal is located along Lower Mabini Street, almost opposite Dane’s Café and Bakeshop, and few steps above BPI building along Harrison Road and few strides below PNB of Session Road.


You can actually visit the Laperal House after you’re done with Mines View Park, Wright Park, The Mansion and Botanical Garden, it is along the way back to the plaza (city centre).
Posted by June Agsaoay at Tuesday, February 10, 2015