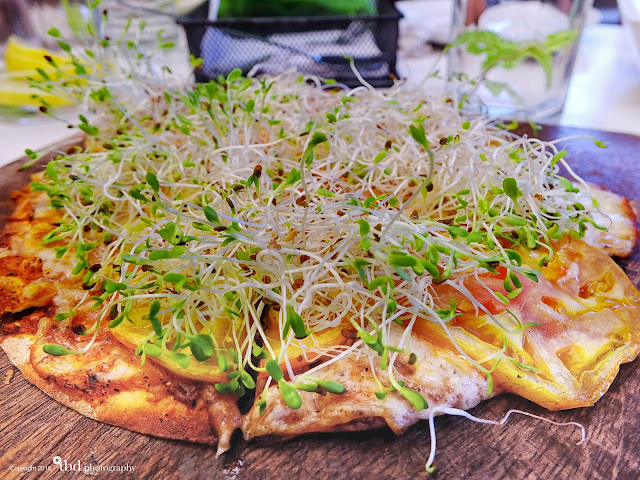 Father’s Day and we decided to go on a “foodtrip”.  I’m a Baguio resident (part-time) so it wouldn’t be difficult for me to find my way searching for places to gratify my binge for good food, and so I thought.
Aside from the cold weather and the famous sights, people come to the city of pines for the food.  Yes, this city has a lot to offer when it comes to “foodies” – from fine dining to simple eateries, hot “bulalo” to cold treats, vegan to meat lovers, local to international gourmets.  The city is a food lovers (and binge eaters) haven.
We started with Good Taste along Legarda Street, it's a favorite, but the queue was too lengthy and it was raining in June, I don’t feel like standing on a queue umbrella-fencing with other people.  We passed it off and headed to Outlook Drive near Mines View Park for a small place popular for their “Bulalo”.  Then again, no place to seat, father’s day is being celebrated all around whether it’s a big restaurant or a hole in the wall!  I thought mothers are more popular?  Even parents are becoming competitive when it comes to holidays! 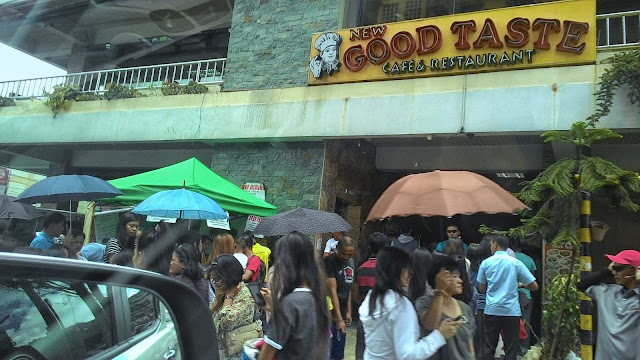 So we drove back down to one of the favorites – Ketchup Food Community.  That sound like a burger joint where people consume gallons of catsup? it isn’t!

Ketchup: The Food Community
Romulo Drive, Barangay Lualhati (Near Wright Park),
Baguio City 2600
Ketchup: The Food Community is a compound of five restaurants namely:
·         Canto – famous for their pork barbecue ribs and beautifully served green salads.
·         Rumah State – Indonesian and Malaysian fares.
·         Green Peppers – pasta, salad, sandwiches and desserts.
·         Happy Tummy – Thai food specialty restaurant.
·         Rancho Norte – Filipino food and fresh fruit shakes.
If you’re new to the city and a pork eater, forget about the rest (or reserve it for some other time) and head immediately to Canto which is just at the entrance.
There's also a queue of people waiting to be seated at Canto which is always the case whenever we come to this place, but we didn’t have any choice and we’re starving.  Canto is famous for their tender, juicy and tasty Lomo Ribs, since we’re a family of 5 + a kid, we ordered 2 plates of big whole slabs of the pork ribs smothered with flavorsome barbecue sauce, garden salad on the side, each good for 2 to 3 persons costs P400 per plate, even the half slab good for one person at P209 is a huge serving.  People come here for the sizeable amount of food, the taste – good enough.
Chili Burger is topped with chili con carne gravy with onions and jalapenos with shoestring potatoes served on a white ceramic pot.  It tasted ordinary for me, did not spin my head around.
Taco Salad with chili con carne on top of chopped lettuce, onions, tomatoes, jalapenos, cream and cheese, with fried tortillas on the side is good but the chili con carne dip is exactly the same thing with the Chili Burger so don't make a mistake (like we did) of ordering both unless you needed an overdose of those stuff.
Since I’ve had the ribs several times and starting to avoid pork (when you’re starting to … aherrm.. age? you have to), I had the beautifully prepared Chicken Pita Wrap – lettuce, cucumber, tomatoes, onions, alfalfa sprouts and bits of tasty grilled chicken topped with equally tasty garlic sauce, it was bursting with flavor for my taste like I wished they added more lettuce to cover the flavor.  Not sure if it’s monosodium glutamate and/or kikkoman sauce perhaps?
The Veggie Pizza (top-most cover pic) is just fine – tomatoes, garlic onions, mozzarella cheese, arugula and alfalfa sprouts.
I need an overdose of green stuff so I got me a full plate of the Cascade Salad  - a mishmash of Baguio's greens in vinaigrette dressing - lettuce, cucumber, tomatoes, bits of watermelons and grated cheese.  I like these alfalfa sprouts, they look so lovely creating a mini forest on top of a green mountain of greens.
The first time I’ve tasted the lomo ribs at Canto, I’ve enjoyed it – with the size and the flavor – but after several visits and tried everything listed on their menu, I’ve come to the conclusion that all taste the same to me, even the green salad dressing, I think they’re using the same recipe for gravies on all their food?  Not sure, maybe my sense of taste has gone awry.

Vizco’s Restaurant and Bakeshop
Address: Session Road,
Baguio City 2600
Phone: (074) 446 7082
I really wanted to thrust the extreme after-taste of the Chicken Pita Wrap I had at Canto, it lingered on my mouth, and I needed a sugar boost, for awhile I wanted to forget that I’m diabetic so we headed to Vizco’s at Session Road.
I ordered their best seller – Strawberry Shortcake – not really tempting as the strawberry topping is too sour but at least it was able to get rid of the chicken pita wrap’s taste on my mouth.  I like their Walnut Chocolate Cake, it’s lip-smacking, lots and lots of chewy wallnuts.  Although the small round Cheese Cake with strawberry syrup tastes so good but as with any other cheese cakes, I got easily satiated after just half of it. Then again, Vizco’s one of the best place in Baguio City for mouthwatering cakes and pastries. 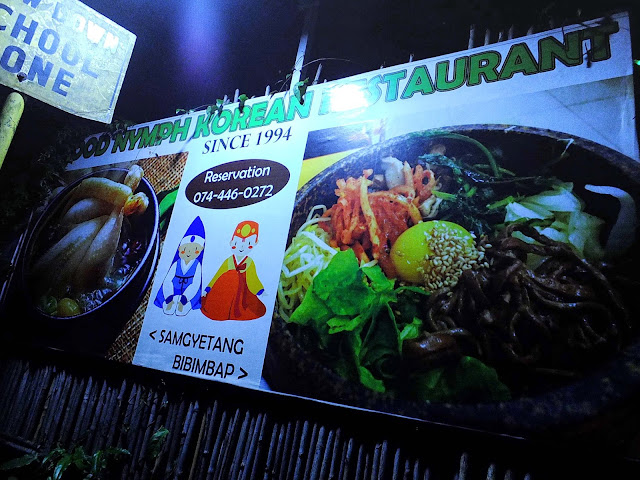 We hunted for something different for dinner and we passed by a Japanese restaurant along Military cut-off but after looking at their menu, my eyes popped-out literally in disbelief at the P5000+ price tag! It was too expensive for our budget so we drove along and stopped at this Korean restaurant called the Wood Nymph, it’s more on our budget.

We were initially served with free 6 plates of different Korean appetizers – sweet seaweeds, the chayote leaves is delicious that I requested for another serving, boiled small potatoes, bean sprouts with shredded carrots, spicy radish, and spicier kimchi.

We ordered the Samgeopsal, Korean-style bacon, that we grilled on the table, smother it with a little of those spicy sauce and wrap it with lettuce.  The sushi is nothing to write home about.

The Sundubujige – spicy tofu stew with seafood (it may have dissolved as I cannot find the seafood!), and sometimes egg (on their menu it says “sometimes egg” but not this time).  Nonetheless the spice made it taste good.

The soybean paste stew called Doenjangjigae made of tofu (again!), clams (may have evaporated somewhere? I can’t seem to find it!) and vegetables, tasted bland, nothing that an 8-grader can’t cook!
They might have run out of some stuff to add to their food fare as I've kept on searching for the other stuff stated on their menu but did not find some of it but it's Father's Day.  It may have dissolved? I don't know really.

All-in-all, it was quite a good(?) taste of Korean cuisine in Baguio City, nothing really special but we got full, not the fullness we had at Canto but just enough, at least I’ve totally forgotten the flavor-fullness of the garlic sauce at Canto.
Posted by Unknown at Sunday, June 19, 2016