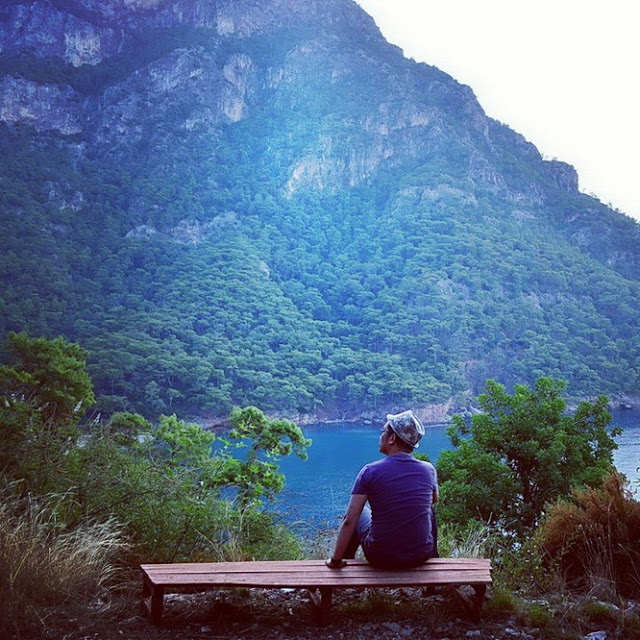 A lot of people are traveling nowadays.  They say that once you’ve got bitten by a travel bug, it’s going to be uncontainable.  Soounds like a virus, right?  Travel once, travel twice, your feet itch like crazy and you’ll be wanting to move from place to place, and discover corners of the world that you’ve never been before or for some people – go back to places that they found fascinating and comfortable.  Quite true, I never found the cure.
Now, I’m spending about 6 months a year out of my very own home.  Well, like I always say – “Home is where the heart is” – traveling became my home, or literally, other people’s home became my home.
Mikael’s interrogatively doubtful question the other day struck me while we’re having the usual nonsense-time-consuming (official work time to be precise, his, not mine) phone conversation.  He dropped the question which I’ve somehow been anticipating he’d gonna ask one of these days.  “What do you get out of traveling?” he quipped.  I told him, he’s going to find that out pretty soon as I was expecting that he’ll be bitten by the travel bug too.  Though somehow, it kept me contemplating for the next couple of hour right after our conversation.  So what was it really?

Why do people travel?
To have a picture beside or in front of a landmark – a touristic shot with Paris’ Eiffel Tower or Rome’s Coliseum on the background?  Have a picturesque photos with the rows of Cairo’s Pyramid or the majestic Banaue Rice Terraces perhaps?   Quite honestly, that used to be my routine.  The word “Selfie” wasn’t a thing then but I used to do that all the time back then. People travel for fun, adventures, to see new sights, new sounds, new smell, discover new cultures.

Different people – different reason for different season.
My early travels during the time I was unaware that this traveling thing is going to slither its way into my bloodstreams, it was mostly for the fun of seeing other places, usually a stop-over coupled with shopping before heading back home for a month-long vacation from my overseas work in the middle east – Hong Kong, Singapore, Thailand – the neighboring countries. That was the start, but several trips eventually led to obsession.
It’s driving me crazy but every time I travel I feel like a new world is opening up or precisely my own small world is opening up to a bigger world.  The more remote the place or the lesser population and the less traveled – the more that it excites me, like it’s an accomplishment of sort.

Then again, what’s in there?  A lot, I would say.
Traveling for me is education.  It’s learning on wheels, on air, on the road, by sea. You get to meet a lot of people, meet new friends, get to know other people’s culture which most of the time are different from yours – what and how they eat, worship, dress, how they conduct their daily lives.  You’ll have the opportunity to compare yours to theirs.   You learn about the history, the significance of every customs, traditions, sights, monuments, edifice and other objects – in contrast to the customary idea of just having a nice photo beside, in front or sometimes on top of each piece of historical artifacts.
One day, you’ll come to realize, you’re not alone in the planet – your culture is not the only culture that exist and universally recognized.  That, each country or nation or region on earth has its own language, its own norms and traditions, ethnicity and identity. By then, and only then you’ll stop making fun at other people on culture-related things that you see on TV just because they’re different from yours or from what you’ve got accustomed to because you’ll come to understand the why, what and how of things not similar to yours.  That people are different – not only among every race on the planet, but also the differences within each race.
You’ll cease wondering, because you’ll know that there will always be diversity among people of different nations or regions within your own people.   What would be totally normal in your country may not be in others.  What could be horrible to you may be totally pleasant to other places. What could be unsavory to you may be delectable to others.  What would be stinky to you might be fragrant to other people.  A three-times-a-day bath may not be rational in other places for some reasons and that may sound unacceptable to you yet reasonable to them.  In contrast to Jim Morrison’s song (People Are Strange) people aren’t strange, they’re just different.
I vividly remember the time I was riding the Paris metro one day on my way to a friend’s house.  I was sitting beside the sliding door opposite me are three girls conversing in my own language, clear enough that I could understand.  They were talking about the local people and how they dress, making comparisons and I heard one of the girls saying that “we dress better” and when she said “we” it means our people, in our own country.  I think they’re forgetting that we’re in Paris!  One of the "Big 4" fashion capitals of the world?  It’s a good thing not a single passenger on the train could understand their conversations, except myself of course.
Here’s another one of those popular idea that I usually hear from not only my own people but I guess from so many others –  that South Asians smell.  But do they really?  I told a friend of mine that if he doesn’t like their smell, why smell them?  For all you know, it works vice-versa, he might not like how you smell too. That’s very possible, ain’t it?
Here’s how a Pakistani former colleague of mine explains it.  He said in their part of the world, women and men should not have the same smell. Men should smell like men and women should smell like, well, women – fragrant, flowery, sweet-scented, soap?  Whatever it is, there must be distinctions otherwise if one smells like the opposite sex, then he or she belong to the other side of the fence.  He said, their women prefer men who smell like men, and he meant – real men. So there you go!

Different places, different people, different perspective.
Traveling is an eye-opener.  It enhances your sense of respect - for other people and what-have-they and self-respect for what-have-you.   Respect for diversity.  It is fun, it is educational, it is a celebration of being a part of this world.
Like someone said (don’t ask me who, I forgot) – “The world is my city”.   I said, the world is a bowl of fruit salad – assorted fruits that may have come from different places, sweet, sour, sometimes pungent yet appetizing when put all together.
So the next time you travel, keep an open mind, see the sights, eat the food, immerse in culture, learn the language, discover things, then you’ll understand the value of my “bowl of fruit salad” whatever that means.
Like I always say, “Traveling is the best education there is, and the most expensive one, and no graduation.”


Who is Mikael in case you’re wondering?  No, he’s not an imaginary creation, though I sometimes wish he is.  He’s tangible, alive and kicking.  Just someone who constantly bugs me with lots of unnecessary but thought-provoking questions.
Posted by Unknown at Thursday, June 09, 2016